A few days ago, the worldwide web enjoyed the opportunity to get acquainted with the results of iPhone X’s tests in Geekbench. According to the information made public, the jubilee version of iPhone was awarded the status of the world’s most powerful, high-performance mobile device. Moreover, iPhone X turned out to possess more computing power than the 13” Pro-series MacBook, which comes with the Intel Core i5 processing unit known as Kaby Lake. However, now there have been published the test results of the other two newcomer iPhones: 8 and 8+. According to the newly available information, iPhone X isn’t the most powerful smartphone in the present-day market.

When tested in the single-core trial of Geekbench, the 4.7-inch iPhone 8 scored a very impressive result of 4,195 points. iPhone 8+, which measures 5.5 in, reached the level of 4,128 points and occupied the second place. And the jubilee iPhone X is in the third position in this ranking with a single-core test result of 4,028 points. 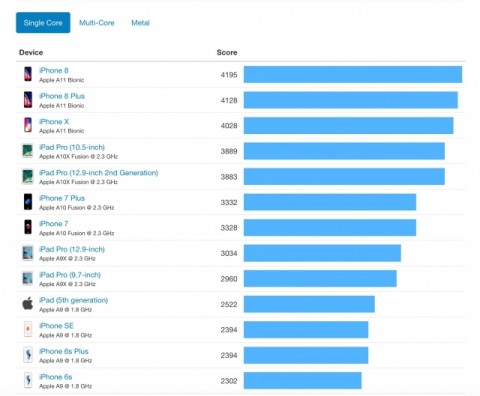 When the testers switched to the multi-core trial, the situation was the same. The first place went to the basic model, iPhone 8, which achieved 10,005 points. Worth noting, this is an 80% improvement in comparison with the result showed by last year’s iPhone 7+. As for iPhone 8+, it scored 9,829 points, while iPhone X delivered a score of 9,287. 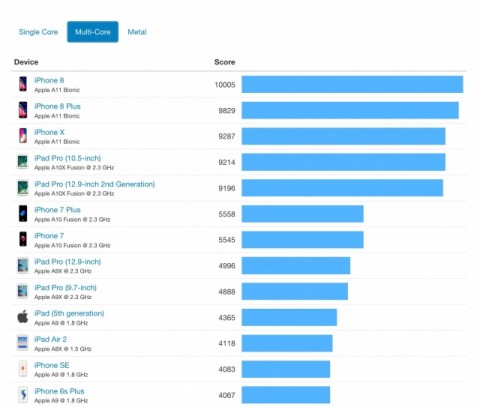 On the other hand, in the Metal trial, the first positions belong to the 10.5-inch Pro-series iPad and the 12.9-inch iPad Pro of the second generation. They scored almost twice as many points as the new iPhones. 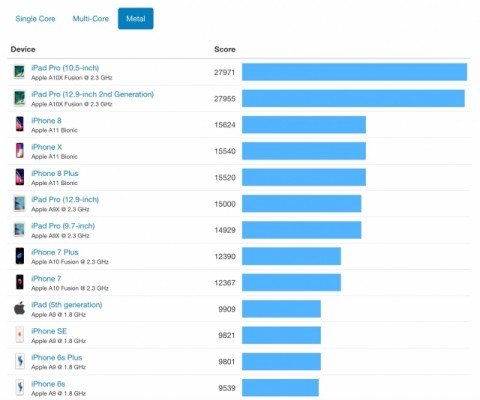 Since all three newcomer iPhones come with one and the same hexa-core chipset Apple A11 Bionic, the different results can only be explained by different display resolutions. iPhone 8’s screen measures 4.7 in and has a resolution of 1334×750. iPhone 8+ features a 5.5-inch screen, 1920×1080. The jubilee version, iPhone X, is fitted with a 5.8-inch display, 2436×1125.