The fresh-out-of-the-oven iPhone 8, 8+ and X are fitted with a hexa-core chipset known under the name Apple A11 Bionic. This powerful processing unit incorporates two high-performance Monsoon cores, and four Mistral cores orientated towards the highest possible energy efficiency. Besides, it’s the first chipset in history fitted with a GPU developed by Apple. Before the smartphones were officially announced, Apple A11 Bionic was already known as the would-be most powerful mobile CPU in the market. Now, iPhone X has been tested in Geekbench, where the newcomer device demonstrated even more stunning results.

iPhone X powered by the chipset Apple A11 Bionic has been pronounced as the world’s first mobile device to have stepped over the 10,000-point threshold in the Geekbench test for multiple cores. 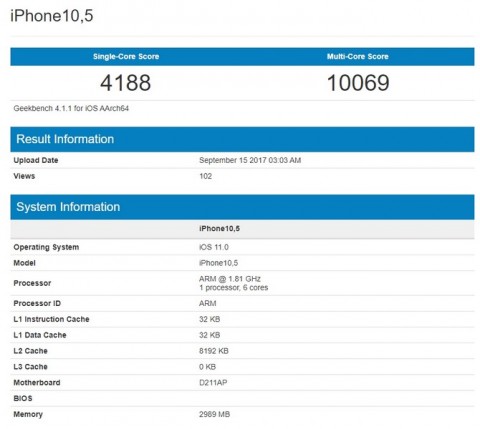 In the single-core test, the jubilee iPhone scores over 4,000 points. For comparison, the present-day Android-based flagships barely reach the level of 2,000 points.

As for the test for multiple cores, the margin between the fresh iPhone X and the latest Android-based flagships amounted to almost 100 percent.

The most interesting fact is that iPhone X can compete with MacBook Pro in terms of performance. The 13-inch Pro-series MacBook fitted with a two-core Intel processor Core i5 (aka Kaby Lake) scores about 9,000 points in the Geekbench test for multiple cores.

In the meantime, Daniel Matt, a technical expert, has written on his blog that Apple managed to achieve such stunning results thanks to switching from 32-bit to upgraded 64-bit architecture.